Retired, and living in Uniondale 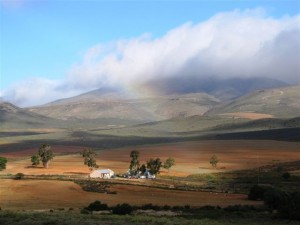 Uniondale – the Little Karoo’s best kept secret.  Situated on the R62 in a green valley, and surrounded by the Kamanassie and Kouga mountains, Uniondale delights visitors with its diversity, stunning scenery, magical flora and beautiful historical buildings.

Uniondale is internationally known for its ghost, and locals will take great interest in telling you wonderful stories about the town and the Uniondale Ghost.

So how come Colleen and Barry Nugent, ex-Zimbabwe and Kwa-Zulu Natal, and long-time residents in Cape Town, landed up in Uniondale?

A situation familiar to many of us – Barry was made redundant in 2005.  He and Colleen realized that if they were to survive, they needed to do something completely different.  Barry had always had a yen to move to the country and call a piece of land his own.   Once the children had completed their university education, they started looking around – Riebeeck-Kasteel, Robertson, Barrydale, Calitzdorp, but nothing appealed.  When friends who had moved to Uniondale invited them for the weekend, they readily accepted, even though they had no idea where Uniondale was!  In no time at all, they had invested in a 1.2 hectare plot, with the intention of building their own home.

After having made the decision to embark on their new-life adventure and move to a completely different part of South Africa,  events happened at a rapid rate.    They were offered a house to rent in Uniondale, and their house in Cape Town was sold within four days.  They had six weeks to move out. 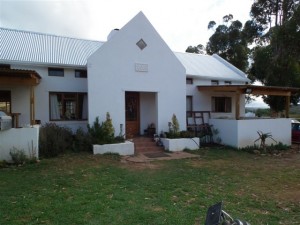 It’s very interesting to note that even when the universe appears to be pointing you in a certain direction that challenges abound.  The move to Uniondale brought with it countless problems and issues  –  the floods of 2007 saw their rented house under water and roads washed away.  Colleen was very homesick for family and friends in Cape Town and missed the proximity of the shops that had become a way of life.  When they built a flatlet on their plot, in order to be on site when the main house was being built, they had no electricity or water, and spent several months in a state of stress and sleepless nights until such time as the house was built.

But time heals all.  A couple of years later, they have discovered the peace that Uniondale offers.  The townsfolk have been very welcoming, and their Afrikaans has radically improved.  They have cows, ostriches, sheep and goats for neighbours and are winning the battle of establishing a garden in the windiest place in Uniondale!  And where else in the world would one have an audience of 9 ostriches and their babies while you hang up the washing!

Barry works on a part-time basis for a manufacturing company in Cape Town.  He is also busy with erecting masts for windpower monitoring purposes, which has been a long-time interest of his.  Colleen believes that they have not retired, as was intended, but have semigrated!  She says that they are much more busy than they ever were in Cape Town, and although she took some time to adjust to a completely different way of living, both she and Barry would not change a thing.

They miss the family in Cape Town, but the children love coming to visit and their new grand-daughter loves to visit Granny and Grandpa on the farm.   Colleen’s parents have also moved to Uniondale, and Colleen’s father has established a fully functional workshop in Uniondale.

Colleen firmly believes in pursuing your dream.  It may come with challenges, but the end result is exciting and rewarding. 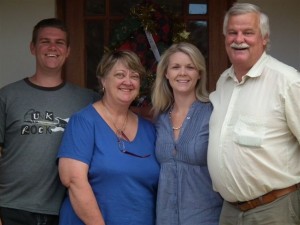